The Werkleitz Festival 2021 is a correspondence location of the 2021 Ars Electronica. The festival and European Media Art Platform (EMAP) will present the virtual final exhibition of the 44 works produced by EMAP grant recipients from 2018 to 2021. In addition to the 44 works produced, over 12 podcasts, and the lectures recorded from the conference new world dis/order from 18 June to 4 July in cooperation with the German Federal Cultural Foundation and the support of the ZEIT Foundation, three streamed programmes will present the festival’s three spheres: move to … sociosphere, ecosphere und bodydatasphere.

The EMAP Bal Masque organised by EMAP member IMPAKT represents the conclusion of the four-year grant-production cycle of the European Media Art Platform. 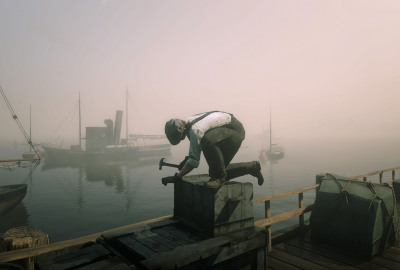 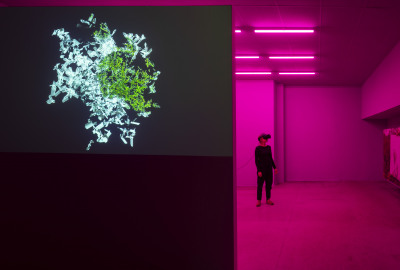 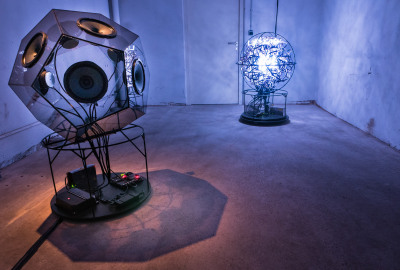 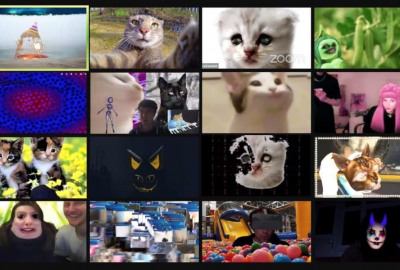 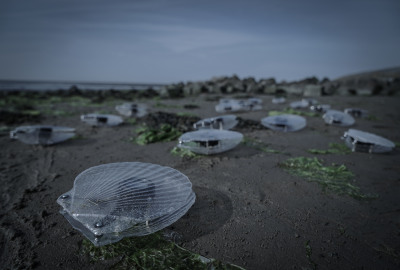 In the course of the previous year, there has been a lot of talk about new world orders – and even about the disorder that the world has devolved into. Elections, the pandemic, the climate crisis have swelled the upheaval of our globalised and digitalised living environment to dimensions never seen before. Under the title new world dis/order, this year’s conference and discourse programme is devoted to such phenomena of our so “out of joint time” (Shakespeare). It investigates the ever more brutal online culture and information wars and the tracking technologies intended to promote our health, with their origins in surveillance capitalism.It questions the religious-like faith in the infallibility of data and the often blind trust placed in technological solutions to all conceivable human problems. It explores the astounding fragility of global infrastructures, the desperation with which society clings to an economic system based on endless growth and the exploitation of all resources, and the potentially irreversible destruction of the earth by and for human-made technologies. In this sense, it also demonstrates the urgency with which new forms of collective reason and common action, as well as visions and concepts for digital technologies that benefit everyone are needed. It is about nothing less than saving the planet and the question as to what future world dis/order we want to live (or merely survive) in.

On three weekends renowned theorists, researchers and artists will discuss and reflect on the three associated spheres: the sociosphere, the ecosphere and the bodydatasphere.

The programme consists of events streamed from the former headquartersof the East German Ministry of State Securityin Halle (Saale), a series of online performances and films from artists from theEuropean Media Art Platform (EMAP) and podcasts as well as features produced for the festival.

The conference and discourse programme new world dis/order is organized in collaboration with the German Federal Cultural Foundation and supported by the ZEIT Foundation.
Curated by Sandra Naumann and Daniela Silvestrin.

The sociosphere programme in the new world dis/order conference will place emphasis on the social, political and economic challenges of our digital, globalised world.

It all begins with a conversation between Katharina Nocun, co-author of Fake Facts, and sociologist Carolin Wiedemann about the digital battlefields and weapons now being used to wage cultural and political wars. Thereafter, the tech philosopher Marta Peirano will talk with Sarah Grant, expert in networked media and founder of Radical Networks, about the increasing visibility of critical infrastructures – and our attachment to them – at the very moment of their failure.

In their lecture, performance Birgit Schneider, professor of knowledge cultures and media environments, and radio artist Kate Donovan will place our anthropocentric world view in question by letting the audience experience how other life forms perceive the world.

The group DISNOVATION.ORG, currently made up of Nicolas Maigret, Maria Roszkowska and Gottlieb Baruch, will in turn question the predominant narrative of growth and progress and conjure up a radically different economic model.

The evening will conclude with a keynote talk by the renowned sociologist, media and design theorist Benjamin Bratton on the necessity of political and economic action and thought in planetary dimensions in a post-pandemic world.

Tino Daum (Das Kapital sind wir. Zur Kritik der digitalen Ökonomie / We Are the Capital: A Critique of Digital Economy) and Robert Feustel (‘Am Anfang war die Information’. Digitalisierung als Religion / ‘Initially there was Information’. Digitalisation as Religion) will kick off the Sunday events with an exchange on the religious-like cult of the digital in contemporary capitalism.

For the next session, Julia Kloiber, advocate for technologies that serve the common good and co-founder of organisations like Superrr Lab, Prototype Fund and Code for Germany, will speak with Frederike Kaltheuner, tech policy analyst, researcher and activist for justice in the data world.

In her lecture, Phoebe V. Moore, associate professor of the future of work at the University of Leicester, will consider issues of power, responsibility and morality in the use of artificial intelligence in the working world. Thereafter, the artist and researcher Joana Moll will demonstrate the connection between the loss of biodiversity and the increasing computing power of microprocessors – or even the explosion of technocapitalism. Finally, Kathrin Passig, author and co-founder of blogs like Riesenmaschine [Giant Machine] and Techniktagebuch [Technical Diary], will present reflections from her book Neue Staaten erfinden. Wie im Netz Politik entsteht [Inventing new states. How Politics Emerges on the Net], to be released next year.

To round off the day, the artist collective Total Refusal will offer a pseudo-Marxist urban tour through Red Dead Redemption 2, analysing profit and value, capital and accumulation in the mass medium of video games.

During the sociosphere, two chapters from the collectively composed, ongoing video series Bottled Songs, which explores greed, power and terrorism in online media and social networks, can be viewed: My Crush was a Superstar by Chloé Galibert-Laine and The Spokesman by Kevin B. Lee. Additional films will be available in the On Demand section during the festival.

In addition, a closed online workshop entitled Not Found On will be presented by Aay Liparotto, focusing on the non-public wiki that she has created by and for feminist, queer bodies.

Documentation of the work The Great Offshore by Rybn.org inside the festival location in Halle (Saale)
Fokus
25. 6.–27. 6. 2021
ecosphere
Programm

The events of the ecosphere shed light on the consequences of the digitalisation of our ecosystem, knowledge generated by a shift in perspective away from humans and towards other life forms, and the opportunities for “peaceful co-existence” and cooperation between species.

The programme will be opened by Ela Spalding, artist~moderator and cultural producer with a focus on the practice and mediation of expanded visions of ecology that explore reciprocal relationships between different species and their environment.

In his keynote speech on Saturday evening, James Bridle, who with his book New Dark Age: Technology and the End of the Future created an international furore, will explore the potential of machine-based and other non-human intelligence and the ecological effects of technology. He will investigate ways to reconceive our relationships with other life forms in the struggle for a more just and viable future.

How a socially and ecologically balanced world might look will be the subject taken up by Kat Austen, an artist, instructor, researcher and designer who works at the interface between art, technology and science. Prior to this, the architectural researcher, artist and former project manager of the research agency Forensic Architecture, Stefan Laxness, will talk about different approaches to the restoration of damaged ecosystems in Europe.

Saturday evening will come to an end with a concert by the Iceland-based sound and media artist Konrad Korabiewski, who in his minimalist compositions often works with field recordings, by means of which he explores the ecosystems surrounding him.

On both Saturday and Sunday,individuals can take part in an audio walk by the artist group Ligna in Halle.A programme calledUlysses2.0allows participants to follow the traces of Odysseus and questionswhatan inter-species relationship that ensures the survival of all life forms might looklike. 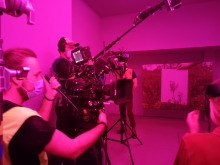 The discourse programme around the bodydatasphere is devoted to digital bodies and sensory perception with a special focus on the fact that these are being increasingly surrounded, overseen, pre-calculated and controlled by technological environments – andimportantlyalsosubjected to the capitalistic logic of maximum returns.

To begin with, on Saturday, the philosopher Anna-Verena Nosthoff and the cultural studies expert and economist Felix Maschewski will discuss the body data collected by massively popular “wearables”, which are being marketed by technology companies in the newly discovered research and business field of consumer health.

Thereafter, in his keynote speech, Chris Salter, professor of computer-based art in Montreal, will explain how the 19th-century theory of psychophysics is currently experiencing a renaissance in the development of sensor-controlled wearables, VR headsets and wireless speaker systems. Karin Harrasser, professor of cultural studies at the Kunstuniversität Linz, will respondin depth to his reflections.

On Sunday, the bioart visual artist Margherita Pevere, who is fascinated by biological material and its transformation, will analyse the permeability and vulnerability of the human body. In a lecture,the author and artist Sophie Hoyle, who takes an intersectional approach to the fields of postcolonialism, queerness, feminism, critical psychiatry and disability, will examine issues of biopolitics, of the “sick” and pathologised body, and of the subjection to broader systems of “security” and control.

Two works created within the framework of EMAP artist residencies will also be shown.In a modified web version, the robotic, online controllable system, Empathy Swarm Telehabitat, activates and reacts to the emotions of human viewers. The Kissing Data Symphony, on the other hand, explores whether a kiss can be translated into biometric feedback. To do so, the brainwaves of two individuals kissing in public and of the viewing public will be measured, connected and rendered visible and audible. 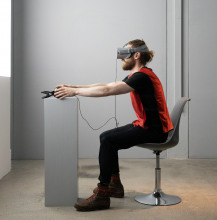 Documentation of the work Seeing I: The Protagonists by EMAP artist Mark Farid inside the festival location in Halle (Saale)